The Kop at Anfield dates back to 1905-06. At the end of that season which saw Liverpool lift the second of their league championships the directors at the club decided to reward the loyalty of the fans by building a new brick and cinder banking at the Walton Breck road end of the ground. It was christened as the Spion Kop by Ernest Jones in memory of the many scousers who died in battle over a hill in South Africa by the same name during the Boer War.

In 1928 The Kop was altered to terracing and a massive roof added to protect the thousands of fans who gathered to watch their beloved team play. Other teams named their stands as the Kop but the one at Anfield was the original and the best.

The terrace housed the greatest fans in the game and it was often thought that the fans were worth a goal start to the reds. They would try and suck the ball in if their team was losing and in one of the Kop's famous nights they put the fear of God into Inter Milan in a European semi-final.

The Kop was turned into a shrine in 1989 to the 96 fans who were innocently killed at Hillsborough. The fight for Justice still goes on today more than 10 years after the disaster. After the disaster new guidelines were issued about terracing at football games which brought to an end standing at top flight games. And so in 1994 the Kop changed from a terrace to an all-seater Kop Grandstand. The Kop's Last Stand came against Norwich City in May 1994 and Jeremy Goss went down in history as the last player to score in front of the famous terrace. 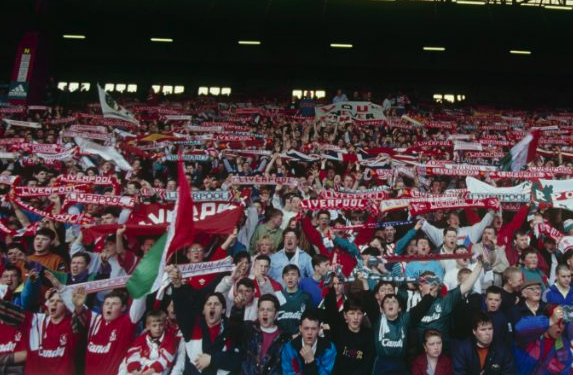