The 1992 FA Cup Final was contested by Liverpool and Sunderland at Wembley. Liverpool won 2–0, with goals from Michael Thomas and Ian Rush.

This was the first FA Cup Final to feature a Second Division team since Queens Park Rangers reached the final in 1982, and the last until Millwall played at Cardiff in 2004. Despite being underdogs, Sunderland had the better of the first half. The team was full of running and kept Liverpool's strikeforce of Ian Rush and Dean Saunders at bay.

Sunderland's best chance fell to John Byrne who somehow miss-kicked when presented with a volley 6 yards out. Liverpool's best chance saw Michael Thomas lift his shot over the bar when pressured by the Rokerites goalkeeper Tony Norman. Thomas redeemed himself after 47 minutes, when he scored the first goal of the game, following excellent work down the right wing by Steve McManaman, the youngest player on the pitch. Tony Norman could only get fingertips to Thomas's superbly angled half-volley.

Following this goal, the Reds had more confidence and started playing better football. On 67 minutes Dean Saunders released Michael Thomas who sped into the penalty area. His progress was halted but the ball fell to Ian Rush who slotted the ball into the bottom left-hand corner of the net. It was Rush's 5th goal in FA Cup Finals at Wembley - a record. Liverpool continued to dominate for the rest of the game and Ray Houghton came close to scoring when he almost lobbed Tony Norman from 40 yards.

Liverpool captain Mark Wright held aloft the FA Cup for Liverpool. During the presentation, the winning team was mistakenly given the loser's medals and Sunderland found themselves with winning medals. This was later rectified by the players themselves, on the pitch. It was Liverpool's fifth triumph in the competition, and would be their only major trophy under the management of Graeme Souness, who was appointed a year earlier and would resign within two years of the FA Cup success.

Liverpool did not win the FA Cup until nine years later. It was Sunderland's first FA Cup final since their triumph 19 years earlier and they have not reached the final since, although they did reach the semi-final 12 years later. Notable absences from the Liverpool side were John Barnes and Ronnie Whelan, who were ruled out with injuries and left unable to add to their already long list of major honours won with the Reds.

Whelan (who left Liverpool two years later) never won another major trophy with Liverpool, although Barnes would add the Football League Cup to his personal honours list during his five remaining seasons at Anfield. Rob Jones was Liverpool's last remaining player from the game, finally leaving them in 1999 just before he retired as a player. This was the same year that Kevin Ball became the last player from the Sunderland team in this game to leave the club. 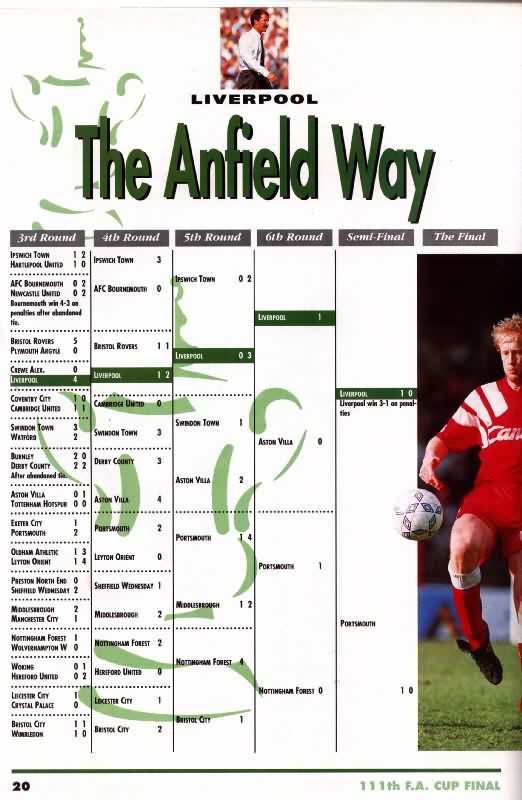 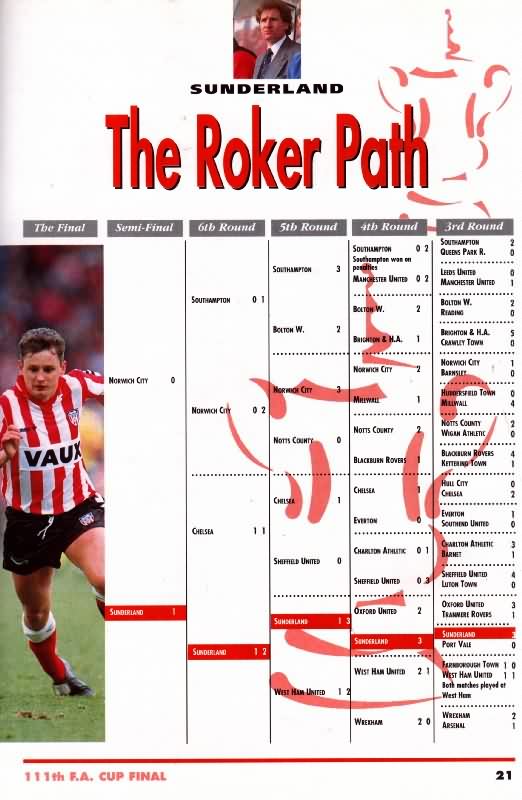