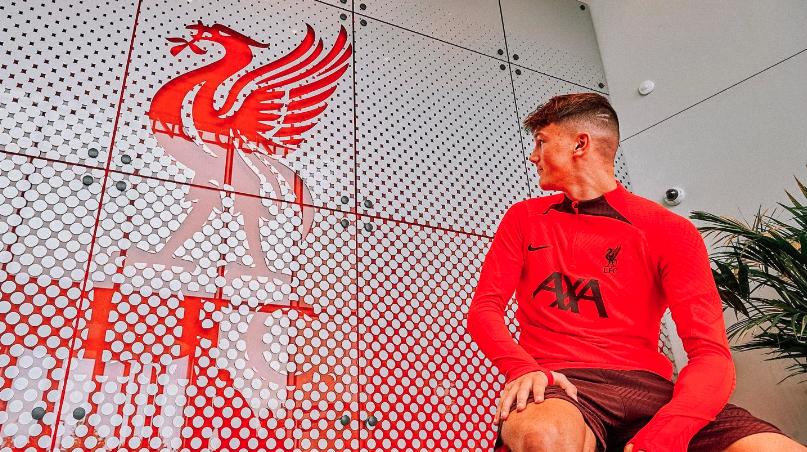 Liverpool have completed the signing of Aberdeen right-back Calvin Ramsay for £6.5m.

Liverpool are paying an initial £4m up front with a further £2.5m coming in the form of add-ons.

The 18-year-old recently travelled to Liverpool to finalise personal terms and undergo a medical. The defender has signed a five-year deal at Anfield and will link up with Jurgen Klopp's squad for pre-season. Liverpool have no plans to loan Ramsay out.

"I'm just buzzing and it's a dream come true really to be here," the defender told Liverpool's official website after completing his move.

"It was a dream come true to play for Aberdeen, and now to be at one of the biggest, if not the biggest club in the world, it's a massive achievement and I'm looking forward to trying to show the fans what I've got.

"Hopefully I can come in in pre-season, show everyone at the club, the staff, players what I've got and then we'll see what happens from there."

Ramsay broke into the Aberdeen first team in 2020/21 and made 33 appearances in the season just finished, scoring one goal and registering nine assists across all competitions.

His performances earned him the SFWA Young Player of the Year Award while he also has European experience through the Europa Conference League, along with U21 international experience.

Liverpool had been locked in talks with the Dons over the defender after making an initial £4m offer, with £2m in add-ons.

However, it is understood Aberdeen wanted at least £5m up front, with £5m in add-ons.

But the £6.5m fee agreed ensures Ramsay will become Aberdeen's record sale, surpassing their current record of £3m from Nottingham Forest for Scott McKenna. The Dons have also received an extra £1m for the centre-back this summer after Forest were promoted to the Premier League.

Ramsay becomes Liverpool's third signing this summer after the arrivals of Darwin Nunez in a club-record £85m deal from Benfica and Fabio Carvalho, who signed from Fulham.

Sky Sports News revealed last week that Ramsay's preferred choice was to join Liverpool, out of a number of interested clubs in England, Germany and Italy.

In January, Aberdeen rejected a bid for the player from Bologna - understood to be an £830,000 loan offer, with an obligation to buy for £3.3m.

Liverpool have identified Ramsay as a long-term right-back rival for England star Trent Alexander-Arnold - a player Ramsay has highlighted as one of his biggest influences.

"As a full back, watching Trent and his crosses and his technical ability - if I can get to that level then it would be a bonus," he said.

"Andy Robertson at Liverpool and (Kieran) Tierney at Arsenal have been brilliant and they're players I look up to, especially as they are full-backs like me. I feel I could go on to do that as well."

Speaking during the season, Dons manager Jim Goodwin wasn't surprised by the growing interest in the teenager.

He said: "Prior to January, Calvin was probably one of the best young full-backs in the world to be perfectly honest. That is not an over-exaggeration.

"His stats, his data in terms of his attacking numbers, putting crosses in the box were incredible.

"He had a little dip in form. Whether that was because his head was turned in January with whether he was moving or not moving."